Macedo, who leads the Attica points for the Callie’s Performance Products 410 Sprints, led all 30 laps for his eighth 410 sprint win of the 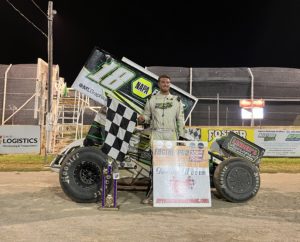 year (he also has a pair of 360 wins). It was his fifth career win at Attica. Macedo’s season has caught the eye of others as he got a ride for the Knoxville Nationals and this past week drove NASCAR driver Alex Bowman’s sprint car with the Tezos All Star Circuit of Champions before coming back to Ohio to his Ray Brooks Racing #18.

“I know I’ve said it before but we’ve been struggling a little here this year and Steven (Linder) has really been working hard and getting this thing right. I seen the 3J (Trey Jacobs) in second and I was getting a little worried because most of the races he wins are on the bottom. I was having some tough calls under the caution trying to decide what I wanted to do and finally I decided to commit to the top and make it work. I kept playing with the wing and it got me tight then free and I really didn’t know what to do. Those last eight laps I told myself it’s just a heat race….I put together some good laps and got the job done,” said Macedo beside his Fremont Auto Parts, Grant Decker Construction, Linder’s Speed Equipment, Gill Construction, CK Mechanical, ML Graphics, Catawba Island Club, Durst backed machine.

“I feel like to get to the next level you just have to win races…it’s the cure to a lot of things. Luckily we’ve been able to do that. My team is such a great team….there’s a ton of crew guys here….we have a great group of people. We have great sponsors and Ray Brooks is a great owner,” added Macedo.

It’s a huge understatement to say Devin Shiels is on a roll. The Britton, Michigan driver took the lead for good on lap four and drove away 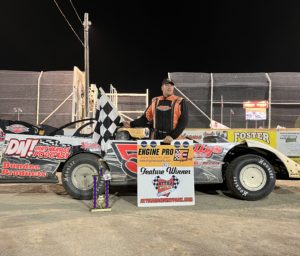 in a non-stop 25 lap Dirt Nerds Podcast/Propane.com UMP Late Model feature for his third win in a row and fifth of the season. Shiels also has five runner-up finishes at Attica…in fact his only finish other than first or second was a fifth in June. Shiels – who has three track titles including the last two in a row – now has 15 career feature wins at Attica, placing him fifth on the division’s all time win list.

“What a year…and to do this on the high side of the track. Everyone knows I’m a bottom track guy but my crew has made the changes to get me up there and it works. I was afraid I hurt my right rear tire up there but it just kept rolling. We also have a pair of wins at Oak Shade so we hope to wrap up that track championship tomorrow and keep doing what we do here,” said Shiels beside his Magic Fountain Auto Wash, Rally’s Hamburgers, Dundee Products, Banshee Graphics, Salenbein Trucking & Excavating backed #51. 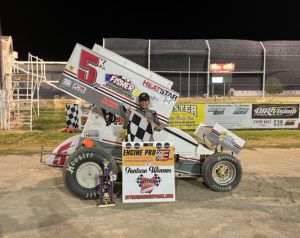 “We had a great car. We finished fourth last week and we thought about a couple of things we could have done to make it a little faster. We changed a couple of things this week and it paid off out there. Shawn’s been faster than us the past two nights in clean air but once we get to lapped traffic we can catch up to him and get by him. I have to thank my dad, Denny, all of our sponsors…we couldn’t do this without them,” said Jedrzejek beside his Heat Star, Mr. Heater, Fisher Custom Printing, Ronda Jedrzejek Howard Hanna Real Estate, Sips & Such Social House, BEI Supply & Rental, Greber Racing Components, FK Rod Ends, Simpson Race Products, Perfection Fabricators, Team Line Em Up, DiBaggio Family backed #5K.

Macedo battled Travis Philo for the lead on the opening lap of the 410 sprint feature. A caution early kept the field close but when the green flew again, Macedo checked out, lapping up to 12th place by the half-way point when a caution flew.

On the restart he once again pulled away to a nearly three second lead, but defending track champion Trey Jacobs took second and within two laps cut that lead in half just before a caution with eight laps to go. In clean air, Macedo pulled away to a convincing win over Philo, DJ Foos, Jacobs and Stuart Brubaker.

In the non-stop late model feature, Shiels jumped into the lead at the drop lf the green but Mike Bores snuck by to lead lap three with Shiels regaining the top spot a circuit later. Shiels quickly pulled away but with 10 laps to go former track champion Ryan Markham, who took second on lap 14, began to close and was within a car length of Shiels as they raced in lapped traffic with seven laps to go.

Shiels did not make a mistake and drove to the win over Markham, Collin Shipley, Bores and Drew Smith.

With 10 laps to go and in heavy lapped traffic Valenti’s front wing collapsed and the Fostoria, Ohio driver had his hands full. Jedrzejek raced under Valenti a couple of laps but once clear of traffic Valenti was able to pull away slightly.

Coming to the white flag Valenti hit the turn four cushion and made contact with the front stretch wall and that was the opening Jedrzejek needed as he drove into the lead and took the win over Valenti, Weaver, Shullick and Ivy.

Attica Raceway Park will host the traditional Attica Ambush on Friday and Saturday, Sept. 2 and 3. On Friday, the All Pro Aluminum Cylinder Heads/Kistler Racing Products 410 Attica Fremont Championship Series presented by the Baumann Auto Group will battle for $5,000 to win the American Late Model Series vying for $5,000 to win and the NAPA of Bryan AFCS presented by Jason Dietsch Trailer Sales 305 Sprints going for $1,000 to win. Saturday will see the AFCS 410 sprints go for $7,000 to win with the NRA Sprint Invader 360 sprints battling for $3,000 to win and the AFCS 305 sprints vying for $1,500 to win. In total for the weekend, there will be over $100,000 in prize money up for grabs. 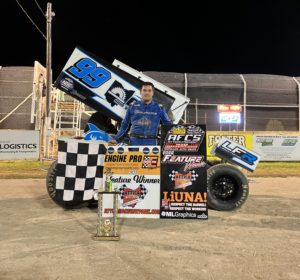 Gee, aboard the Logan Fenton Racing #99, led all 30 laps of the Callie’s Performance Products 410 Sprints A-main, but it wasn’t easy as Tyler Gunn pressured him several times late in the race but when Gunn jumped the cushion and flipped in turn four with two laps to go, Gee had clear sailing, hitting his marks perfectly on the restart and driving to the victory worth $3,500.

“I feel like we should have had a few here but it’s a tough place to win. That last restart I see the  18 car (Macedo) behind you so you know you have to be perfect. I thought I cut two really good laps there at the end. I have to thank my dad, Jack, Tim…they’ve been working hard all year. We haven’t had any luck. It feels like things are turning around and we’re getting up front and win some races. The cautions really helped me…traffic was tough. I tried to give it away early in the race,” said Gee beside his Dirt Sharks Excavation/ Pack Rat Dumpster, Strong Properties backed machine. 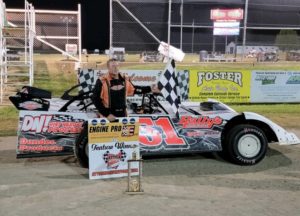 dominating victory, his fourth of the season and 14th of his career at Attica, placing him 5th on the division’s all-time win list. The 2017, 2020 and 2021 Attica late model champion has not finished out of the top five all season at Attica and has seven overall victories in 2022 at various tracks.

Teenager Collin Shipley would get by Mike Bores on the last lap to steal second with BJ Gregory and Larry Bellman rounding out the top five.

“The cushion in three and four was very treacherous. I knew Markham (Ryan) would be up there and I just tried not to screw it up. What year we are having….this car is just really good,” said Shiels beside his Magic Fountain Auto Wash, Rally’s Hamburgers, Dundee Products, Banshee Graphics, Salenbein Trucking & Excavating backed #51. 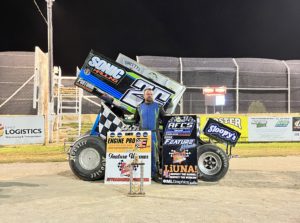 Fremont, Ohio’s Jamie Miller, a three time and defending Attica champion, drove from eighth to third in just eight laps of the Fremont Fence 305 Sprint A-main and then blasted from third to the lead a lap later and drove away to his fourth win of the season at Attica and his sixth overall victory of 2022. The win was Miller’s 35th career 305 victory at the track and pulls him closer to Paul Weaver in the NAPA of Bryan AFCS presented by Jason Dietsch Trailer Sales standings.

Attica Raceway Park will be back in action Friday, Aug. 26 with the 410 and 305 sprints and UMP late models in action.