ATTICA, Ohio – It took until the final race of the 2022 season at Attica Raceway Park, but DJ Foos finally found victory lane, leading all 30 laps of the 410 sprint feature and withstanding a one lap sprint to the checkers after a caution, Foos scored the $4,000 payday on Kistler Racing Products/Jon Wright’s Custom Chrome Plating presents the Mark Keegan Classic Season Championship Night. 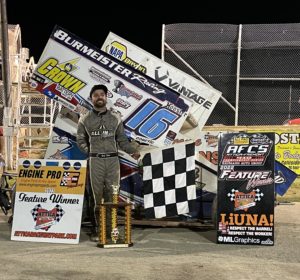 While Foos, Attica’s 2019 champion, was celebrating the long awaited victory, Lemoore, California’s Cole Macedo wrapped up the Callie’s Performance Products 410 Sprints track title. Heading into the championship night for the All Pro Aluminum Cylinder Heads/Kistler Racing Products Attica Fremont Championship Series presented by the Baumann Auto Group, all Macedo has to do is take a green in hot laps to wrap up that title with a legitimate shot at scoring the Fremont Speedway title as well.

For Foos the victory aboard the Burmeister Racing #16 was his fifth career victory at Attica.

“When you start on the front row of these things…this is our third time…and I was like man I keep getting beat and I don’t know what we can change to get better. Doug Berryman has been working on our shock package and Mikey’s been doing a really good job with the car. We’ve kind of found speed in qualifying and that feature was pretty much qualifying all 30 laps. I kind of got complacent there on that last run when we caught lapped traffic and I seen Cole poke his nose in there  and I pulled the wing back a little bit and got better and then there was a yellow coming through three and four and I thought I was going to give it away. I felt I got through one and two pretty good on the restart,” said Foos. 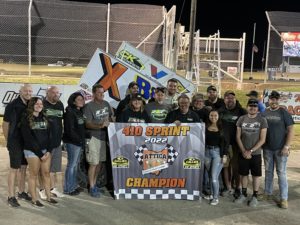 “I can’t say enough for my guys and all the people who makes this possible. Ray Brooks racing has really raised the bar this year and we’re all just trying to play catch-up. We destroyed a car last weekend and got this car out and Brandon Riehl fixed it for us and he did a heck of a job for us. I have to thank my wife Bethany….those quiet rides home aren’t that fun and she does a good job of keeping the conversation going,” added Foos beside his Pub 400, Jet Express, Burmeister Trophy, CR Juices, Crown Battery, All In Tent Rental, KS Sales & Service, Vantage Branding backed machine.

For Macedo and the Ray Brooks Racing #18, the Attica Title was one of their main goals coming into the season.

“It’s been a very stressful year racing for points. I’m going to be honest….I’m not a big fan of racing for points. I feel like we race a little bit different and don’t always go for the win. But in that race I hung it out there as hard as I could. I came into tonight trying not to think about the points and keep doing what we’ve been doing and obviously it’s been working. Super happy to get this done for Ray and Mike and Steven and all of our crew guys who bust their tails to prevent part failures and kind of putting it all in my corner and because of them it makes my job easier,” said Macedo. 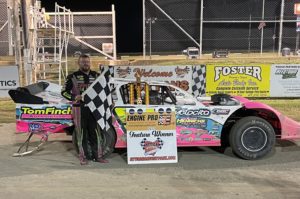 used it to dominate the Dirt Nerds Podcast/Propane.com UMP Late Model feature leading all 25 laps that saw only one caution flag. The victory was the fourth of the season at Attica for Schlenk who now owns 35 career late model wins at the track to lead all drivers.

“I love this place and I love a big cushion. The lapped cars all pretty much stayed on the bottom and that was all I needed. I had a couple of mistakes off the back side of the track but pretty much this thing was a rocket ship,” said Schlenk beside his Velicita Fire Suits, VP Fuels, Dominator Race Products, Bilstein Shocks, Lendrum Springs, Tom Finch Auto backed #91.

Coming into the final race, Britton, Michigan’s Devin Shiels had not finished out of the top five all season. All he had to do was qualify and 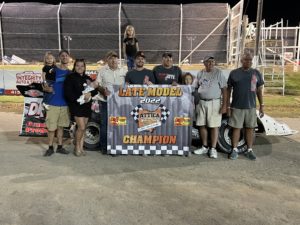 he would lock up the track’s 2022 late model championship. However, while warming up Shiels car had a motor issue and he had to scratch for the night. Luckily the track’s point system allows for one dropped event and Shiels was able to score his fourth track title and his third in a row.

“The motor seemed fine when we fired up before coming here but when we started it I felt a vibration and that was it. We were consistent all year and that allowed us to have this night. It’s a shame…I really wanted to end the year with that never finishing out of the top five deal but we’ll take another championship and come back and defend next season,” said Shiels beside his Magic Fountain Auto Wash, Rally’s Hamburgers, Dundee Products, Banshee Graphics, Salenbein Trucking & Excavating backed #51.

You couldn’t script a more perfect scenario for the Fremont Fence 305 Sprint feature. A driver who lives near Attica Raceway Park who hasn’t sat in a sprint car since 2017 nor a 305 sprint in 20 years, comes out on the track’s last race of the season and takes a win. That’s exactly what Brandon Martin did Friday driving a second team car for Ryan French Racing and to have his wife and children there to witness it. It was his first career 305 sprint win to go with three 410 victories in his career at Attica.

“Thank the good lord above. I didn’t know if I’d ever get to do this again. It’s tough to do this. It’s a privilege to drive these,” said an 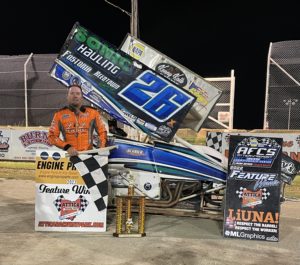 emotional Martin. “I’ve raced all over the place but I’ve had the longest ride home from this place over the years that I’ve raced. It’s just great to be here…this is home. I never said I was retired…I haven’t raced since 17 and I haven’t raced a 305 in 20 years. It’s been awhile. I still have a race car and a motor…I just don’t have any money to go do it. This is just great to have everyone here just talking to me and all my family here.”

Fremont’s Paul Weaver, who has more career wins at Attica than any other driver in any division combined, never finished out of the top six all season and it propelled him to his sixth 305 track championship. Just as important, Weaver could wrap up his third consecutive NAPA of Bryan Attica Fremont Championship Series presented by Jason Dietsch Trailer Sales title at Fremont Saturday.

“Starting up front definitely helps. This is a really maneuverable track and you can 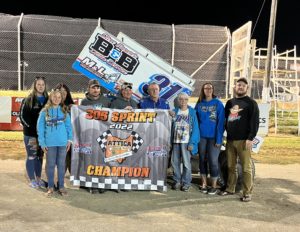 find your way around traffic. Biggest thing is just to finish all the races. If you can finish consistently in the top six you’ve had a really good year. I have to thank Steve and Pam Brown of B&B Drain, Bob Hampshire for a hell of a motor…no engine problems all year and my wife for maintaining the car this week while I was sick…it was her set-up on it,” said Weaver.

After the first attempt to start the 30-lap 410 sprint feature  was slowed by debris, Foos grabbed the lead with Emerson Axsom, Chris Andrews, Macedo, Stuart Brubaker, Tim Shaffer and Travis Philo in tow. Foos opened a sizeable advantage until entering slower traffic on lap eight, allowing Axsom, Andrews, and Cole Macedo to close. As the battle for the lead started to heat up the caution flag appeared when Andrews slowed after packing his right rear wheel with mud.

Foos pulled away on the restart as Macedo started to pressure Axsom for second. Travis Philo briefly went from fourth to second with a slide job in turn four, only to lose momentum and drop back to fourth coming down the front stretch.

Macedo pressured Axsom for the second position on lap 23 and was able to make the pass a lap later. Macedo quickly closed in and tried a slide job on Foos with two laps to go but was unable to make the pass. Just after the leaders took the white flag the final caution in the feature appeared when Zach Ames slid off the track in turn four.

This setup a one lap dash to the finish. Macedo tried the slider on the restart, but Foos used the momentum on the cushion to drive to the victory. Philo was able to get by Macedo for second on the final corner with Macedo holding onto third. Axsom and Tim Shaffer rounded out the top five.

Schlenk grabbed the lead at the drop of the green for the $2,000 to win late model feature with Todd Brennan, Ryan Markham, Justin Chance and Collin Shipley giving chase. Chance moved into second on lap three with Shipley taking third two laps later.

The only caution flew for Troy Hahn on lap seven but that didn’t slow Schlenk who drove off when the green flew. However, the action behind him was fantastic as Markham drove into second on lap 14 with Chance, Shipley, BJ Gregory, Matt Irey and Ryan Missler giving chase. After a long battle, Shipley moved into third on lap 22 but no one had anything for Schlenk as he blasted the cushion for the win with Markham, Shipley, Chance and Missler rounding out the top five.

Kelsey Ivy led the first two laps of the 305 sprint feature before Martin took over on lap three. Steve Rando got caught up in a spin involving two other cars and took a wild ride on lap seven but escaped injury. On the restart Martin led while Ivy, Kody Brewer, Jamie Miller, Brandon Moore, Kasey Jedrzejek and Weaver gave chase.

Miller drove from fourth to second on lap nine but his top wing collapsed ending his night. On the restart Martin drove away as Ivy battled with Brewer and Jedrzejek for second with the later taking the runner-up spot on lap 13. While Martin consistently hit his marks to stay on point, Jedrzejek and Brewer battled hard for second.

Prior to the night’s racing Attica’s director of operations Rex LeJeune was honored by track personnel, race teams and many family and friend for his 40 years of service – the last 17 as the helm of Attica – to racing as he is now retired from the sport after making a huge impact.

Jon Wright was already an old-car hobbyist when he founded Custom Chrome Plating in Grafton, Ohio to serve auto restorers, and that was over 50 years ago. Custom Chrome Plating handles the tough jobs that no one else will do. The attention to detail for which Custom Chrome Plating is recognized, starts as soon as your parts arrive. The parts are photographed to create a visual record, which provides reference for each of the craftsmen who will work on refurbishing your parts. Each piece is examined in detail and any imperfections are marked for repair. Using whatever fabrication methods are necessary – welding, soldering, grinding, buffing- Custom Chrome Plating will bring your parts back to their original shape and dimensions. Some of the best hot rod, antique, and bike shops in the country use CCP for their plating needs.