ATTICA, Ohio – Travis Philo was so close to a win at Attica Raceway Park a couple of weeks ago. The Bowling Green, Ohio driver wasn’t going to let another opportunity slip through his fingers as he lead all 30 laps Friday, July 22, working traffic to perfection to score his first win of 2022 on Advanced Drainage Solutions/Steinle Chevrolet-Buick/NAPA Auto Parts Night.

The victory was the eight of his career at Attica, though it wasn’t easy as Craig Mintz and Trey Jacobs challenged at the mid-way point of the race. Philo’s chassis was just repaired Monday after a crash the previous weekend.

presented by the Bauman Auto Group defending champion DJ Foos would come home fourth to close the gap on Macedo for that title.

“We had a really good car. AJ, my dad, Kayden, Carly, my uncle Dave is here…we’ve been having a stretch of bad luck. We tore up a car at Eldora and we’ve run a lot of seconds and thirds this year. Finally nice to get the job done. This is AJ (Havens) and I and Kayden’s first win together. I don’t like starting on the front row….you’re kinda expected to win those races but I just had a good car. I was trying to pedal the car a little bit so I didn’t catch the lapped cars and the cautions fell at the right time. I got the wing back and it worked out pretty good,” said Philo beside his Control Design Solutions, Tire Slick, Columbus Equipment, Banshee Graphics, Berryman Racing Shocks backed #5T.

Ryan Markham led all 25 laps of the Dirt Nerds Podcast/Propane.com UMP Late Model feature to claim his second straight victory at Attica. It is the 21st of his career at the track to sit third for the division’s all-time win list. It wasn’t easy for Markham as several restarts Casey Noonan challenged to his inside. But once Markham got his  momentum on the high side he pulled away.

“This feels so good especially how we struggled early this year. The car felt so good up top I knew I just couldn’t panic and make a mistake 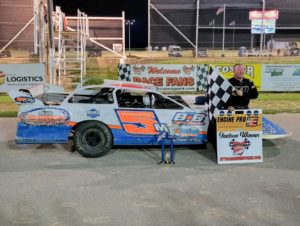 When Jamie Miller slid off the track with 11 laps to go, Fremont, Ohio’s Matt Foos was there to pounce in the Fremont Fence 305 Sprint feature. Foos, a former Attica dirt truck champion, held off several challenges from Kasey Jedrzejek and worked his way perfectly through heavy lapped traffic for his 2nd win of the season at Attica and the sixth of his career in the division.

Foos’ victory in the non-stop feature got him a little closer to Paul Weaver (finished fourth) and Miller (finished third) in the chase for the title of the NAPA of Bryan Attica Fremont Championship Series presented by Jason Dietsch Trailer Sales.

“I knew I had a chance if I stayed close to Jamie (Miller). I think even if he hadn’t gotten off the track I had something for him. The car was so good but you had to be careful up top…it was a very thin cushion,” said Foos beside his Level Performance, Mitten Painting, Fremont Fence, Rohr Total Lawn Care, DJ Johnson & Family, M&L Excavating, Level Utilities, Chuck’s Budget Brakes, The Car Spa, Berryman Racing Shocks, Kear’s Speed Shop, 818 Club backed #12.

Philo jumped out to the lead at the drop of the green for the 30-lap Callie’s Performance Products 410 Sprint feature with Craig Mintz, Trey Jacobs, Caleb Griffith and DJ Foos in tow. Philo quickly built a sizeable lead until a caution with just four laps in. Following a red on the restart, Philo once again pulled away from the field when the green appeared. Back to back cautions on laps seven and eight kept the field close.

Once again though, when the green flew so did Philo, pulling to a substantial lead while Mintz, Jacobs and Griffith battled for second.  But as Philo got set to hit lapped traffic at the half-way point, Mintz and Jacobs closed. Jacobs took second right on Philo’s tail by lap 19, but once Philo cleared lapped traffic, he pulled away.

Mintz got back around Jacobs with nine laps to go but no one was going to catch Philo who took the victory over Mintz, Jacobs, Foos and 16th starter Jordan Ryan. Ryan earned an extra $500 from NAPA Auto Parts for being the hard charger and doing it on a four race old right rear tire.

Markham grabbed the lead at the drop of the green for the 25-lap late model feature with Chester Fitch, Casey Noonan, Devin Shiels and Mike Bores in pursuit. Four cautions in the first 11 laps kept Markham on his toes as Noonan would drive to his inside in the first set of turns each restart.

Once he got his momentum up, Markham drove away but the battle for second was intense throughout with Noonan, Bores and Shiels battling hard. When the checkers flew Markham took the win over Shiels, who has yet to finish out of the top five all season and now has five runner-up finishes, Noonan, Bores and Jeff Warnick.

Jamie Miller bolted into the lead of the 25 lap 305 feature over Foos, Jedrzejek, Dustin Stroup and Brenden Torok. Miller quickly pulled away but heavy lapped traffic by  lap nine allowed Foos and Jedrzejek to close, Miller slipped off the track on lap 14 and Foos took the lead with Jedrzejek, Stroup and Miller giving chase.

Attica Raceway Park will be back in action Friday, July 29 with the AFCS 410 and 305 sprints and UMP late models in action.