Larson, the defending NASCAR champion, took the lead from his brother-in-law Brad Sweet on a lap 13restart and seemed to have the race in hand until lapped traffic came into play on lap 27. Schatz, the 10 time World of Outlaws champion, had worked his way to third by lap 21 and took second from Sweet on lap 29. In just six laps Schatz cut Larson’s lead in half. The huge crowd were on their feet as Schatz pulled under Larson on several occasions, but Larson made some daring moves in traffic to seal the $15,000 win, the fifth overall victory at Attica in his career.

“I found the top there a couple of laps before that caution. He (Sweet) was protecting on the restart and I felt that I could carry my momentum off of there. I felt really good but we got into traffic and it was hard to see. I could see Donny (Schatz) was running the bottom in one and two and I wasn’t really sure where he would be in three and four. I was kind of struggling when I caught Cap (Henry) and I missed the bottom a little bit and I knew Donny was right there,” said Larson beside his Finley Farms, Tarlton and Son, Folkens Bros. Trucking, FloRacing, JVI Group backed #57.

“Thankfully Donny is the cleanest racer in the world really and you can always trust him when you’re racing with him. I don’t know if there’s a lot of midget guys watching right now with a USAC race going on, but if they are take notes off of Donny Schatz. He’s a clean as it gets. A lot of people have lost respect so take notes from that guy,” added Larson.

For Schatz, his charge to the front gives him a lot of optimism heading to Eldora Speedway the rest of the week.

“The guys have definitely found a lot of things to get this thing a lot better. Everybody at Ford worked extra hard to get it where I can keep it on the end of my foot and control it a lot better. We had a decent run the other night and tonight it was good. We were racing for the win finally. That feels good. Kyle did a great job and I just had to go where he wasn’t and my car was decent everywhere. I feel like I didn’t fade throughout the race and I didn’t take off great but I didn’t fade at the end,” said Schatz of his Carquest, Ford Performance, Sage Fruit, Digital Ally, Curb, J&J Auto Racing backed #15.

“Everyone has their own characteristics in racing and I’ve been around a long time and I think everybody knows I’m not that way and I’m not about to be that way. It’s just the way I was brought up and raised and I’m proud of that fact. I’m going to stay that way and I guess I’ll end that way. If it bites me it bites me but it’s going to be my forte,” added Schatz.

Attica Raceway Park will be back in action Friday, July 22 with the All Pro Aluminum Cylinder Heads/Kistler Racing Products Attica Fremont Championship Series presented by the Baumann Auto Group 410 sprints, the NAPA of Bryan AFCS presented by Jason Dietsch Trailer Sales 305 sprints and the UMP Late Models in action.

ATTICA, Ohio – Tanner Thorson moved from the cushion to the bottom of Attica Raceway Park with a pair of laps to go in the 410 sprint feature and the move paid off. Thorson, from Carson City, Nevada, drove to his first ever Attica win aboard the Demyan/Rudzik sprint car on Croghan Colonial Bank/Smith Family Foods/Bucyrus Road Materials Night presented by Integrity Auto and Truck Sales of Bucyrus.

It was anything but easy for the 2022 Chili Bowl champion and former USAC national midget champion. He took the lead from Travis Philo after Philo got sideways in traffic on lap nine. But Phil came storming back and was right on Thorson’s rear bumper with two laps to go. That’s when Thorson came down off the cushion to the bottom of the track and pulled away for the win. 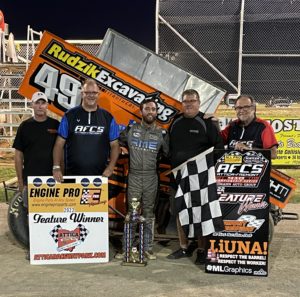 “I’m just getting a little more comfortable. We all have our different feels and BK (Brian Kemenah) has been working hard to get me better. Hats off to him and this whole crew. I’ve done good in the 49x before and finally get the monkey off our back. It’s been a trying year for me in multiple cars. I can’t thank these guys enough…Rudzik and everyone that’s involved in this program. Hopefully we can carry this momentum into the Doty,” said Thorson beside his Rudzik Excavating, Kistler Racing Products backed machine.

“I figured it (bottom) was coming in. The top started getting dirtier as we were going along and I felt like I was getting slower especially in one and two. I saw his nose peak down there and I knew I was going to have to chop it down there and hopefully stick and he not drive around me,” added Thorson of his $4,000 pay day.

With his runner-up finish and Craig Mintz and Trey Jacobs finishing third and fourth, the point battle for the All Pro Aluminum Cylinder Heads/Kistler Racing Products Attica Fremont Championship Series presented by the Baumann Auto Group really tightens up.

The Dirt Nerds Podcast/Propane.com UMP Late Model feature was a barn-burner. Ashland, Ohio’s Ryan Markham, a former Attica track champion, used a restart with 10 laps to go to drive around Devin Shiels to take the lead and drove to his first Attica win of the year. It was his 20th career victory at the track.

“This is the sixth night on this car and we have two wins. It’s not even new, it’s a 2017 chassis. We had that first start and he (Shiels) did 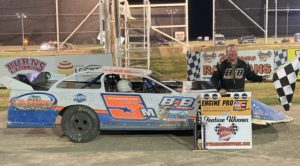 that big slider on me and I was like well it’s a little too early in the race for that so I just wanted to bide my time and save my tires a little bit. I started racing him a little harder there…I knew my car was just good,” said Markham beside his B&B Drain Service, Accu-Force Shock Dyno, Mars Trucking, Monster Motors, TruForm, Macto Tools by Jimmy, Clear Detail backed #5M.

Fremont, Ohio’s Paul Weaver has more laps around Attica than any other competitor. The veteran, who has more victories at the track than anyone in Attica history, nearly gave one away. On the final lap Weaver drove off the high side of turn two off the track, but was able to bring it back on and hold off a charging Jimmy McGrath for his second victory of the season. It was his 66th career Fremont Fence 305 victory. 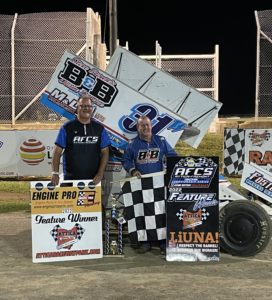 “When you keep telling yourself ‘don’t do that, don’t do that’ then you do that…it’s a sign of old age. Just to be fair, the cushion was actually on the other side of the banking,” joked Weaver. “When the track is this good everyone is wide open. It’s a half-mile on the very outside of the track and a quarter mile on the bottom. The poor motor was just screaming on the top side but I knew I had to keep in the throttle because they were all over me,” said Weaver beside his Steve Brown’s B&B Drain Service, M&L Excavating, Hampshire Racing Engines backed #31.

Weaver’s win coupled with Jamie Miller’s sixth place finish really tightens up the battle for title of the NAPA of Bryan AFCS presented by Jason Dietsch Trailer Sales. Weaver is looking to make it three AFCS titles in a row.

At the drop of the green for the 30-lap 410 sprint feature, Philo bolted into the lead with Thorson, Mintz, Kyle Capodice and Lachlan McHugh in tow. Philo built a sizeable lead before lapped traffic came into play by lap eight. Phil nearly spun while battling in traffic, handing the lead to Thorson.

Following a lap 14 caution, Thorson could not shake Philo as Mintz, Capodice, McHugh and Trey Jacobs gave chase. Once Thorson started putting laps together, he pulled away slightly from Philo who had his hands full with Mintz.

A caution on lap 19 followed by a nasty tumble for Brian Smith on the restart – he was not injured – allowed Philo to stay right on Thorson’s tail. After the green flew, Philo stayed within a couple of car lengths of Thorson. As the laps ticked off Philo took a tenth of a second off of Thorson’s lead every circuit. With two to go Phil raced inside of Thorson who drove to the bottom of turns one and two and was able to pull away for the win. Philo, Mintz, Jacobs and McHugh rounded out the top five.

Shiels grabbed the early lead of the 25-lap late model feature with Markham, Justin Chance, Ryan Missler and Larry Bellman in pursuit. A caution with five laps in kept the field close as Shiels could not shake Markham or Missler.

Markham kept racing to Shiels outside lap after lap but a caution with 10 to go gave Shiels a clear track. On the restart Markham drove around Shiels into the lead while Missler, 13th starter Rusty Schlenk and Casey Noonan battled for third.

A final caution for debris with four laps to go did not stop Markham as he drove to the win over Shiels, Missler, Noonan and Chance.

In a caution-filled 305 sprint A-main, Jimmy McGrath lead the first eight laps until Weaver wrestled control away on lap nine. Third through seventh changed hands every lap until the final caution fell on lap 19 when third place running Dustin Stroup had a rear axle failure.

Weaver could not shake McGrath and when Weaver slid off the track on the last lap McGrath made a last ditch charge but came up just short as Weaver held on for the win over McGrath, Tyler Shullick, Mike Keegan and Logan Riel.

Attica Raceway Park will be back in action Tuesday, July 12 for the 34th Annual Ohio Logistics Brad Doty Classic Presented by Racing Optics featuring the World of Outlaws NOS Energy Drink Sprint Car Series. Reserved seats are still available by going to www.atticaracewaypark.com and clicking on the Brad Doty Classic link at the top of the home page.