ATTICA, Ohio – It’s been awhile since Cale Griffith visited victory lane at Attica Raceway Park. That streak ended Friday, May 13 as the Sandusky, Ohio driver, who was the 410 sprint champion at the track in 2014, lead all 30 non-stop laps Friday for the Eric Phillips 34thAnniversary Classic presented by Integrity Auto and Truck Sales of Bucyrus  on American Powersports/Edward Jones Mike Neill Financial Advisor Night.

The win wasn’t easy as Griffith had to deal with lapped traffic with Cole Macedo glued to his rear bumper. It was Griffith’s fourth career win in the Callie’s Performance Products 410 sprint division and was worth $4,000. Macedo’s second place finish solidifies his position atop the All Pro Aluminum Cylinder Heads/Kistler Racing Products Attica Fremont Championship Series presented by the Baumann Auto Group.

“It’s been awhile. I was kind of watching the board there and in the middle of the race the cushion got kind of gnarly down here (in turns

three and four) so I just got away from it. I didn’t want to run against it because …last week I got a big bite of cushion on the last lap and did a tail dragger getting into turn one. I didn’t want to be in a bad position. This is big for those guys (crew)…all the work they’ve done. Ten years ago on Friday the 13th it was two months from now I broke this leg…blew it in half so this is a pretty big deal for us. I’ve personally struggled on these tires. We’ve had a few slip away there at Fremont, we had one last year  that we raced like crazy with my pal Chris Andrews…he was just a little better than us that night. I have to thank Jeff Ward, Mike for doing all this , my dad and my brother for filling in, Gary, Duane and Jack for putting the AFCS on….man this is big,” said Griffith aboard his Jeff Ward Demolitions/Griff’s Engines backed machine.

battle then survived a caution with just three laps to go to claim the Dirt Nerds Podcast/Propane.com UMP Late Model victory. It was Missler’s 17th career late model win at Attica, placing him fourth on the track’s all-time win list for the division.

“When the cushion is like that here you’re bound to beat up some sheet metal. What a race…I’m tired. I just can’t thank enough everybody that helps me out. We’re busier than heck at work…busier than we’ve ever been. I have to thank Weekley Electric, MGX Technologies, HAFTAL, Kepling Flooring, Jackson Farms, my wife, my father-in-law and Evan who help me out a crap ton. It feels to get our first win of the year and hopefully many more,” said Missler beside his Rocket Chassis, Handy Graphics, York Fabrication, Stakt Products, Big D’s Pizza, Elite Motorsports, Accuforce, SCS Gearbox, Maga Lifts, Missler’s Sweets backed machine.

Fremont, Ohio’s Matt Foos took the lead on lap seven and held off Jamie Miller on a one lap shoot-out to score the Fremont Fence 305 Sprint A-main win. It was Foos’ 5thcareer win in the division. The victory also inches Foos closer in the battle for the NAPA Auto Parts of Bryan AFCS presented by Jason Dietsch Trailer Sales title.

“We had a really good car. Put ourselves in a good position starting up front…starting fourth is good in any division because everything is 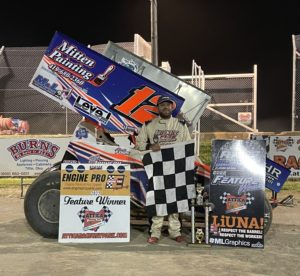 so tough. I knew we were good but I’ve gotten complacent before and stayed up on the rim and not moved around but my brother made sure I didn’t do that again. I knew Jamie (Miller) was behind me and I figured the best defense was to block the top because he’s so good on the top. I felt like if I got a good enough start he couldn’t slide me. I love my dad and he’s a wizard with the wrenches and he makes everybody on this team’s jobs easier. But it feels so good to get one without him…don’t take that the wrong way but it’s a confidence booster that we know what we are doing. I think we have our stuff together. We’re doing some R and D stuff with Doug Berryman and he’s got us on point,” said Foos beside his  Level Performance, Mitten Painting, Fremont Fence, Rohr Total Lawn Care, DJ Johnson & Family, M&L Excavating, Level Utilities, Chuck’s Budget Brakes, The Car Spa, Berryman Racing Shocks, Kear’s Speed Shop, 818 Club backed #12.

Griffith bolted into the lead for the 30 lap 410 sprint feature while Macedo, Byron Reed and Craig Mintz battled for second. Macedo took second on lap 10 with Reed fending off Mintz for third while John Ivy and Paige Polyak battled for fifth. Griffith blasted the cushion to maintain the lead while Macedo tried every lane to stay close.

Heavy lapped traffic came into play with eight laps to go and Macedo was within a couple of car lengths of Griffith while Reed, Mintz, DJ Foos, Polyak and Travis Philo gave chase. Griffith stayed patient in traffic and drove to the win over Macedo, Reed, Foos and Philo.

Cautions plagued the first half of the UMP late model feature with Missler holding the lead over Devin Shiels who had scored the first to feature wins of the year at the track, and Rusty Schlenk. The trio raced side by side and nose to tail the first half of the race. Schlenk moved into second on lap 17 and closed on Missler and drove to his inside numerous times until a caution flew with just three laps to go. Missler got a great restart and pulled away as Schlenk faded. Missler drove to the win over Shiels, Doug Drown, Schlenk and Justin Chance.

After taking the white flag, Miller drove into second just before Moore and Weaver made contact battling for fourth with Moore spinning, setting up the one lap sprint to the win. Foos got an excellent restart and took the victory over Miller, Weaver, Jedrzejek and Ivy.

Attica Raceway Park will host the World of Outlaws NOS Energy Drink Sprint Car Series Friday, May 20 with the 305 sprints also in competition for the Kistler Engines Classic.