Courtney, the defending All Star champion, led all 30 laps for his second ever feature win at Attica and the 11th career All Star win of his 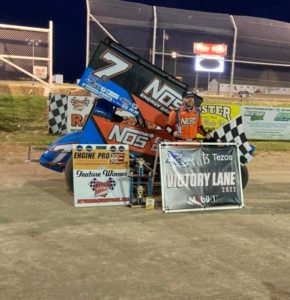 career. Courtney becomes only the second driver in the history of the Attica Spring Nationals to accomplish the weekend sweep. Former All Star champion Frankie Kerr was the only other driver to accomplish the feat, that coming in the inaugural event in 1992.

“It was a little tricky. The wind kind of changed directions there a couple times during the race. Trying not to blow it off the top in one and two was getting a little tricky. When we got to traffic the dust kind of just stayed in the air. Trying to figure out where the lapped cars were going to go was tricky too. Jake and all the boys have been working their tails off all winter. We had a decent Florida but had a really bad last weekend but to come out this weekend and start our All Star defense and come out with two wins and put our NOS Energy Drink car where it belongs is a really good feeling and to hopefully some momentum we can carry to start the summer here,” said Courtney of his NOS Energy Drink, ZMAX, Elliott’s Custom Trailers and Carts backed #7BC.

Courtney jumped into the early lead of the 30-lap All Star feature with Zeb Wise, who scored an All Star win to close out Attica’s season in 2021, followed in second with Cole Duncan, Cory Eliason, Bill Balog and Hunter Schuerenberg in tow. While Courtney and Wise pulled away, Duncan, Eliason and Balog battled hard for third.

Action ground to a half on lap five when Friday night’s third place finisher Craig Mintz tipped over. His team was able to make repairs and he continued. With a clear track Courtney again built a substantial lead over Wise as Duncan settled into third. While battling for eighth, Scott Bogucki tangled with Travis Philo with Byron Reed getting caught up in the melee on lap 10 and ending up on his side.

Once again when the green flew so did Courtney, who set a blistering pace, encountering lapped traffic just five circuits later at the half way point. Courtney made some great, daring moves in lapped traffic and drove away to the victory over Wise, Duncan, Eliason and Schuerenberg.

Miller bolted out to the early lead in the 305 sprint feature over Kasey Jedrzejek, Shawn Valenti, Jimmy McGrath Jr. and Seth Schneider. A pair of cautions in the first 10 laps kept the field close but each restart saw Miller pull away as Valenti grabbed second on lap three and Schneider moving into third two laps later. The car on the move was Bryan Sebetto as he drove from 18th to seventh by lap 10. However Sebetto would spin on lap 13 for the feature’s final caution.

When the green reappeared Miller led Valenti as Weaver drove into third. Weaver took second a lap later and began to close on Miller. With two laps to go Miller was battling through lapped traffic and Weaver pulled to within a couple of car lengths. Miller sliced through the traffic and drove to the win over Weaver, Valenti, a closing Dustin Stroup and Logan Riehl.

Attica Raceway Park will be back in action Friday, April 22 for the Salute to Gene Frankart Open Wheel Shoot Out presented by the Baumann Auto Group and Venture Visionary Partners. It is the kick-off for the All Pro Aluminum Heads/Kistler Racing Products Attica Fremont Championship Series Presented by the Baumann Auto Group for the 410 sprints and the NAPA Auto Parts of Bryan AFCS Presented by Jason Dietsch Trailer Sales for the 305 springs as the Ohio Logistics National Racing Alliance Sprint Invaders (360 c.i.) join the card.

ATTICA, Ohio – Tyler Courtney opened the defense of his Tezos All Star Circuit of Champions title with his first ever win at Attica Raceway Park Friday, April 15 to kick off the Core & Main Spring Nationals presented by Craig Miller Trucking, Erie Paving and Construction Equipment and Supply.

It was the first point night for the All Stars and 49 cars signed in for Attica’s opening night of the 2022 season. With 10 laps to go Courtney and Peck were battling hard for the lead when the two nearly made contact resulting in Peck getting over the fourth turn curb and spinning. Only a caution with four laps to go could slow Courtney who pulled away for his 10th career series win. 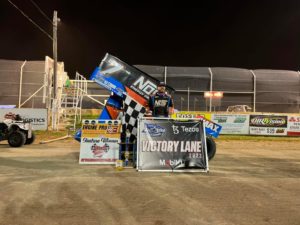 “I just let it go. I was coming across and I felt like I gave him a chance to go or not go and he chose to go. I’m sure he’s mad about it. It was just a racing deal to me. It’s tough….you never want to crash someone to win a race. We never touched at all but he probably sees it differently. I’m not going to let that ruin our night. We’ve never won a race here at Attica so to get our NOS Energy Drink, ZMax,  Maxim, Suicide Shocks, Speedway Engines in victory lane here at Attica is huge. Get the monkey off our back and hopefully get a couple more here. It’s been a pretty incredible past couple of years,” said Courtney.

Craig Mintz jumped into the early lead of the 40 lap feature but Justin Peck took the top spot on lap five. Courtney, who started third, slipped by Mintz on a lap 11 restart for second and hounded Peck until a caution with 13 laps to go. On the restart Courtney threw a couple of sliders at Peck who crossed over to maintain the lead but on lap 30 the pair nearly touched exiting turn four with Peck spinning. Once back to green Courtney pulled away while a tremendous battle ensued for second involving Mintz, Greg Wilson, Scott Bogucki and Parker Price Miller. A caution with four laps to go gave Courtney clean air and he pulled away for the win over Wilson who held off Mintz, All Star rookie Bogucki and Price Miller.

“This is the same car we had last year. We found out some things late in the year last year and it’s paying off,” said Shiels beside his Magic 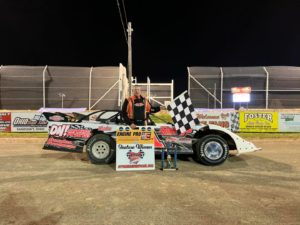 Justin Chance jumped to the early lead of the 25 lap late model feature but Shiels, a three time Attica champion, took the top spot on lap four. A caution on lap 13 put Mike Bores, Schlenk, Chance and Ryan Missler right on the rear bumper of Shiels. Bores and Schlenk hounded the leader the rest of the way with Schlenk moving into second on lap 18 and closed to the rear bumper of Shiels on the last lap but Shiels kept his cool and drove to the win.

The Core and Main Spring Nationals continue Saturday, April 16 at Attica Raceway Park with the Tezos All Star Circuit of Champions along with the Fremont Fence 305 Sprints in action. Gates open at 1 p.m. with racing under way at 5 p.m.

ATTICA, Ohio – One thing in life is certain – change. However, one thing hasn’t for the past 15 years – the support of Ohio Logistics for the Brad Doty Classic. The Findlay, Ohio based company will once again be the title sponsor of the 34th Annual Ohio Logistics Brad Doty Classic Presented by Racing Optics when the World of Outlaws NOS Energy Drink Sprint Car Series invades Attica Raceway Park on Tuesday, July 12.

“I can’t believe it has been 15 years since Chuck Bills (President of Ohio Logistics) chose to be a part of our event! We have been so fortunate to have his support for all these years and it’s because of Ohio Logistics and all of our marketing partners that this race has grown into such a big event,” said Brad Doty, Co-Promoter of the event.

“All of us at Attica Raceway Park can’t thank Chuck and everyone at Ohio Logistics enough for their involvement and friendship over the past 15 years and I look forward to seeing Chuck, his family, and around 200 of his employees and guests every year,” added Doty.

When the World of Outlaw NOS Energy Drink Sprint Car Series invades Attica Raceway Park on Tuesday July 12for the 34th Annual Ohio Logistics Brad Doty Classic Presented by Racing Optics, the competitors will be battling for the $15,000 payday – a $5,000 increase from the previous year – and the special trophy and hardware that goes to the winner.

ATTICA, Ohio –   Everyone is feeling the pinch of higher prices from groceries to gas. Despite the economic situation and rising costs for race teams, fans and tracks, Attica Raceway Park will maintain their weekly purses for all three divisions including many special events as well as their season ending $45,000 point fund.

“All the credit goes to our loyal fans, race teams and great marketing partners that continue to support us every season and every race night,” said Attica promoter John Bores.

I an effort to help race teams battle through the season Attica Raceway Park will allow drivers two “mulligans” for the season as they chase the coveted track titles. If a driver misses up to two events and does not race somewhere else when their division is racing at Attica Raceway Park on that night they will receive 75 points. However only one mulligan can be used at any All Star or World of Outlaw event.

“We understand the strains a season can present to race teams. We will support them as they support us,” said Attica Director of Operations Rex LeJeune.

The 2022 season kicks off Friday March 25 on Underground Utilities Inc./Construction Equipment and Supply Night with the Callies Performance Products 410 Sprints, Propane.com/Dirt Nerds Podcast Dirtcar Late Models, and the Fremont Fence 305 Sprints in action. Gates open at 5 p.m. with racing at 7:45 p.m. Saturday. March 26  is a rain date with gates opening at 2 p.m. and racing at 5 p.m.