ATTICA, Ohio – Cole Macedo showed his maturity behind the wheel of a 410 sprint car Friday, April 22 at Attica Raceway Park. Despite having several great runs for the lead wiped out by late race cautions, the Lemoore, California driver maintained his composure. When the green flew with just two laps to go Macedo stayed glued to Jordan Ryan’s rear bumper and entering the final set of turns on the last lap rocketed to the cushion and around Ryan for a last lap, last corner pass for the win on Baumann Auto Group/Venture Visionary Partners Salute to Gene Frankart Night. 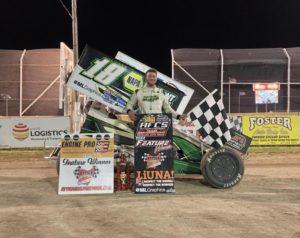 “That was wild. I’ve never done that before….won on the last lap. I was struggling really bad on the restarts. I just couldn’t get to his (Ryan’s) bumper. There at the end I just said screw it and started hammering it as hard as I possibly could. I think the bottom was kind of going away on him (Ryan). We were tight but it was good when you hit it right. I saw…don’t know who it was (Zach Hampton)…almost slide me and I thought I’m either going to wreck or I’m going to win and luckily it paid off,” said Macedo of his Ray Brooks Racing team with sponsorship from Fremont Auto Parts, Gill Construction, Catawba Island Club, ML Graphics backed machine.

Scotland Ontario, Canada’s Dylan Westbrook used heavy lapped traffic to take the lead from Nate Dussel on lap eight, then held off server challenges from Dussel and survived a one lap battle to the checkers to secure his first ever Attica win with the Ohio Logistics National Racing Alliance 360 sprints. 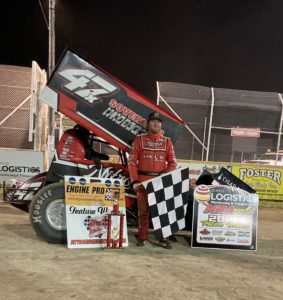 move around a lot during that race. Traffic definitely helped me out…seemed like every time I got to a car they just seemed to part the way for me,” said Westbrook beside his Sovereign Fusion, Nitro 54, Cigar Depot, Robertson Restoration, Hill’s Racing backed machine.

Fremont’s Jamie Miller, the defending Fremont Fence 305 track champion drove around Bryan Sebetto with just five laps to go and then held off a late race charge from Sebetto to secure his second feature win of the year and 33rd of his career at Attica.

to the top and was able to drive around him. He pressured me for quite awhile. I was having a hard time seeing the cushion…there was a lot of dust up there and I went to the bottom again and got through lapped traffic easy,” said Miller beside his Kenny Kalb Farms, JLH General Contractor, Roberts & Sons Contracting, Sonic Hauling, Queen of Clean, Sloopy’s Sports Café, Smitty’s Pizza, Crown Battery, Rohr Total Lawn Care, Schreiner Farms, Reedtown Tavern, Fostoria Mod Shop, Flooring Outlaw, Phil Rister, Carpenter Creative backed #26.

Travis Philo shot into the lead of the 30-lap 410 sprint feature and pulled away until he encountered heavy lapped traffic with eight laps to go. That allowed Craig Mintz and Jordan Ryan to close. With six laps to go and mired in traffic while battling for the lead Mintz and Philo collided with both spinning. That handed Ryan the lead with Macedo, Zane DeVault, Kyle Capodice, Skylar Gee and Zach Hampton in tow.

Every time Macedo would get a run at Ryan, the caution flew. With three laps to go Gee brought out the red and on the ensuing restart third running DeVault hit the front stretch wall, ending his night. On the ensuing restart a spin necessitated another restart. Each time Ryan got a tremendous restart but as he took the white flag Macedo had a great run to the top of turns one and two and pull to the rear bumper of Ryan but Hampton tried a slider for second which gave Ryan a little breathing room down the back stretch on the final lap. Macedo, however, drove hard into turn three, blasted the cushion and rocketed off of four around Ryan to steal the win.

Dussel, a former 305 sprint champion at Attica, jumped into the early lead of the 25 lap NRA A-main over Westbrook, Danny Sams, Dustin Daggett and Max Stambaugh.  Westbrook used traffic to drive into the lead on lap six with Dussel staying close with Sams also within striking distance. A red on lap 13 gave Dussel a shot at Westbrook and he stayed close when the green flew. With three laps to go Dussel jumped the cushion in turn four and made contact with Sams with the third place runner spinning. As they raced through the white flag another caution flew. With a one-lap shootout ahead, Westbrook hit his marks perfectly and drove to the win.

Logan Riehl took the early lead in the 25-lap 305 sprint A-main over Sebetto, Bryce Lucius, Miller and Paul Weaver. Sebetto used a restart on lap 12 to take the lead from Riehl with Miller moving into second a lap later. Miller began to challenge Sebetto for the lead by lap 17 and took the top spot with five laps to go. Sebetto challenged over the next could of laps as they entered lapped traffic with just three laps to go. Miller drove to the checkers  by nearly two seconds over Sebetto.

The win gives Miller an early lead in the NAPA of Bryan AFCS Presented by Jason Dietsch Trailer Sales points.

Attica Raceway Park will be back in action Friday, April 29 for Smith Paving Night featuring the AFCS 410 and 305 sprints and the UMP late models.