“I’ve run second here too many times. Finally it seems like we’re really getting rolling after coming about as close as you could possibly get 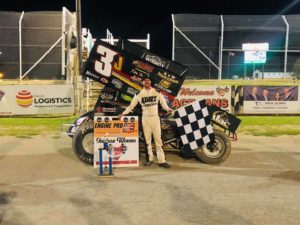 last week. We had that restart there with not very many laps to go (six laps) and I knew the bottom was really good and I was able to make it work. As soon as I cleared Stewie (Stuart Brubaker) I knew I couldn’t let this one get away from me. I started over driving entry a little bit and got hung out in the middle…with a couple to go I told myself to calm down. I knew I was fast enough on the bottom to get by those guys so they would have to really come on and rip the curb to get a run on me to get by. It’s a huge relief to finally get that first one at Attica. I’ve been down on this horse track countless times with my dad and I’ve always dreamed of getting down here. I hope this is the start to many to come,” said Jacobs beside his Performance Foot & Ankle, Thrifty Muffler, VIB-ISO, All Overstock, Tim Yerian, Integrity Auto and Trucks Sales backed #3J.

In a fantastic UMP Late Model A-main, McClure, Ohio’s Rusty Schlenk used a late race restart to drive around Ryan Missler to score his third victory of the year at Attica. It’s his 31st career win at the track as he sits atop the all-time win list for the division. The 25-lap A-main saw Schlenk, Missler and Doug Drown battle throughout. Schlenk was leading last week at Attica and jumped the cushion and smacked the front stretch wall which injured his hand. 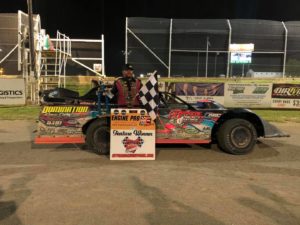 “We’ve had a rough couple of weeks. I made a joke on Facebook last week that I was washed up after putting it into the front stretch wall while leading. So I had to come back and prove to everybody that I have a little bit left in me. We lost power steering in the heat race…that’s why I went to the bottom and ran around the bottom the whole heat just trying to get a re-draw. I suffered it out in the heat race with one hand and no power steering and got a re-draw and that put us up front to have a chance to put on a show for everyone,” said Schlenk beside his Buckeye Concrete, VP Fuel, Tom Finch Auto, Bilstein Shocks, Landrum Springs, Dominator Race Products backed #91.

Fremont, Ohio’s Jamie Miller, a two-time Attica 305 champion took the lead at the drop of the green for the non-stop 25 lap 305 feature and never looked back. Miller, who hasn’t finished out of the top four all season long at Attica, earned his fourth win of the year and 31st of his career to sit second on the track’s all time win list for the division.

“I definitely have no complaints. This thing was fast. There was a little rubber up top there and that’s a little different for here but we’re 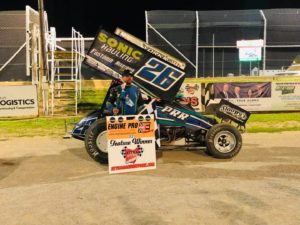 really good up there and I just road it out and parked it. I was looking ahead and watching and all the lapped cars went to the bottom. I was like this can’t be happening,” said Miller of his : Smitty’s Pizza, JLH General Contractor, Queen of Clean, Rohr Total Lawn Care, Sonic Hauling, Phil Rister, Sloopy’s Pizza, Reedtown Tavern, Crown Battery, Schreiner Farms, Roberts & Sons Contracting, Fostoria Mod Shop, Kenny Kalb Farms backed #26.

In the 30-lap Callie’s Performance Products 410 Sprint A-main, Nate Dussel grabbed the early lead but he and DJ Foos made contact while battling up front with Dussel flipping and Foos heading to the pits. That put Brian Smith into the top spot and he held it for a lap before Brubaker charged to the lead.

The caution flew on lap five, wiping out a huge lead for Brubaker. When the green flew Brubaker began to pull away from Chris Andrews while Travis Philo, Smith, Caleb Griffith and Jacobs battled hard for third. That war for third went on for several laps until lap 16 when Philo took a nasty crash off turn four; he was okay.

On the restart 11th starting Jacobs drove under Andrews for second but Andrews fought back retaking the position on lap 19 with Jacobs returning the favor a lap later just before the red flew for Andrew Fike whose car caught fire; he was okay. Brubaker continued to lead but now Jacobs applied pressure to his inside when the green came back out. Brubaker and Jacobs ran side by side for the lead for three laps before Jacobs powered off the bottom into the top spot just before the final caution flew with six laps to go.

Jacobs was just too good on the low side of the track and drove away for the win over Brubaker, Andrews, Griffith and Cole Macedo.

Pole-sitter Doug Drown grabbed the lead at the drop of the green for the 25 lap Dirt Nerds Podcast/Propane.com late model feature with Devin Shiels, Missler and Schlenk right that to challenge. Missler moved into second on the second lap with Schlenk taking third a circuit later just before a caution. The next two green flag laps saw Drown challenged by Missler and Schlenk before another caution. When the green flew the battle was on. Missler grabbed the lead on lap eight but Drown continued to hound him with Schlenk, Ryan Markham and last week’s winner Mike Bores staying close.

Missler encountered lapped traffic by lap 14 and Drown and Schlenk were there to pounce. Schlenk moved into second on lap 17 just before a debris caution. Schlenk used the restart to drive to Missler’s outside and when the leader pushed up the track Schlenk pounced into the lead. Schlenk pulled away the final five laps to take the win over Missler, Bores, Matt Irey and JR Gentry.

Miller immediately grabbed the lead of the Fremont Fence 305 Sprint A and quickly used the cushion to build a sizeable lead over Steve Rando and Justin Lusk. Young Bryce Lucius came on strong with 10 laps to go and took third while Matt Foos charged into fourth. With five laps to go Miller had put three lapped cars between himself and Rando. Foos drove into third on lap 22 and when Rando made contact with the front stretch wall on the last lap Foos grabbed second. Miller drove to the win over Foos, Kasey Jedrzejek, Lucius and Rando.

Attica Raceway Park will take a couple of weeks off for the Attica Independent Fair and will get back to racing on Friday, Aug. 20 with the All Pro Aluminum Cylinder Heads/Kistler Racing Products 410 Attica Fremont Championship Series Presented by the Baumann Auto Group, the UMP late models and the NAPA of Bryan 305 AFCS Presented by Jason Dietsch Trailer Sales in action.