ATTICA, Ohio – Just like the previous night, the FloRacing All Star Circuit of Champions presented by Mobil 1 feature came down to the closing laps in dramatic fashion Saturday at Attica Raceway Park. In an event that was rushed through because of impending weather, Lebanon, Indiana’s Spencer Bayston took the lead from Friday night’s winner Zeb Wise on lap 36 of the 40-lap affair and drove to the $10,000 Attica Ambush victory, to make it a sweep of the track’s biggest paydays in 2021 as he also won the Ohio Logistics Brad Doty Classic presented by Racing Optics in July.

The win on All Pro Aluminum Cylinder Heads Night was Bayston’s fifth career All Star victory and the third career win at Attica. The All Stars have now competed at “Ohio’s Finest Racing” venue 132 times. 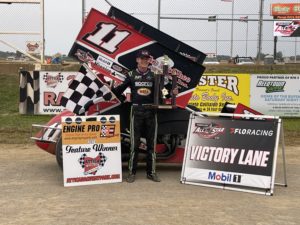 “That was a lot of fun. That whole time I felt like we were just waiting on rain. I didn’t get as good of a dash as I should of and was behind a little bit there…I knew rain was coming. I thought if I could be as aggressive as I could at the start and be as far as we can knowing it was coming. Really really came to life the last half of that race. The long run really helped. I got my wing back and was kind of moving around and got pretty comfortable with what I was doing. I was the only one running the top in one and two…could hit the top where the lip was up and kind of transition my momentum that way. This was kind of back to my outlaw win here….slick as can be and we get this thing really really settled and get me really comfortable,” said Bayston of his Mike McGhee and Associates/XYZ Machining/Winters Performance Products/Champion Racing Oil/FK Rod Ends backed #11.

“What’s cool to think about the last two years I’ve been sitting at home watching these races and now we’re out here. That’s all to Mike McGhee and Sam and Kevin and all their hard work and Kathy and all they’ve put into this program and given me a chance and opportunity,” added Bayston.

While understandably disappointed Angola, Indiana’s Wise put the weekend into perspective as his first year team had a round past couple of weeks.

“You never want to get beat like that…that’s the second time here I’ve gotten beat late. After the month we’ve had I’ll take a first and a second, can’t really be too disappointed with that,” said Wise of his Sun Dollar Restoration/Quick Pits Auto/Jason Dietsch Trailer Sales/Bills Towing and Repair #10.

Current All Star point leader Tyler Courtney also put his best Attica finish into perspective after having lots of issues the previous night.

“I think that’s our best finish at Attica. Last night was just one of those nights you forget about and move on. All around that probably was my worst night in a race car as a driver over the last couple of years. Everyone here at Clauson/Marshall Racing, NOS Energy Drink they stand behind me and we ended up with our best finish here,” said Courtney.

Fremont, Ohio’s Paul Weaver, a five time and defending Attica champion, took the lead of the Fremont Fence 305 feature on lap three and 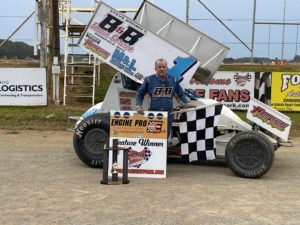 other than a few cautions, dominated the 25-lap affair for a $1,000 pay day. It was Weaver’s seventh win of the year at Attica and the 63rd of his career at the track.

“I didn’t want to catch the lapped cars because you could see the loose dirt rolling across there and it was like a skating rink. At the beginning I thought this thing was too fast too early and would fade at the end. I have to thank Bob Hampshire. We were up there piecing another motor together for a spare and I told him I want to run it since we got it together…it runs pretty good,” said Weaver of his B&B Drain Service/Hampshire Racing Engines/M&L Excavating/Adkins Motorsports backed #1w.

Jac Haudenschild and Craig Mintz brought the All Star field to green for the 40 lap Attica Ambush with Mintz gaining the advantage over Haudenschild, Wise, Gio Scelzi and Courtney. Wise moved into second on lap two a challenged Mintz for the lead by lap seven as Scelzi and Courtney battled for third. A caution on lap seven slowed the tremendous battle up front.

On the restart Wise went back to work on Mintz as Scelzi and Courtney continued their battle for third. Wise drove around Mintz for the lead on lap 10 but Mintz returned the favor the next lap.

Mintz was able to pull away slightly from Wise while Courtney battled with Scelzi, eighth starter Bayston and Justin Peck for third. With 15 laps to go Wise was on the move. He and Mintz battled side by side for two laps until Wise took the lead on lap 28. Bayston was now the driver on the move having took third from Courtney on lap 25.

With seven laps remaining with Wise holding a couple of car length lead, Bayston pulled around Mintz and took second with Courtney moving into third a lap later. As the field took the five to go signal Bayston was racing to the outside of Wise and took the lead on lap 36 and drove away to the win over Wise, Courtney, Mintz and Peck.

In the 25 lap 305 feature Shawn Valenti jumped into the lead with Kasey Jedrzejek and Weaver challenging. Weaver took second on lap two as a light rain fell and drove into the lead on lap three. Weaver built a substantial lead of nearly four seconds until the caution flew on lap 11.

The restart running order was Weaver, Zeth Sabo, Jedrzejek, Valenti and Matt Foos. Weaver again pulled away when the green flew while Sabo ran comfortably in second while Jedrzejek and Valenti battled for third. Jedrzejek brought the caution out on lap 17 and on the other end of the track Sabo also sat side ways.

When the green flew so did Weaver, driving away to nearly a five second victory over Valenti, Kasey Ziebold, Seth Schneider and Foos.

Attica Raceway Park will wrap up the 2021 season Friday, Sept. 10 on Kistler Racing Products/Jon Wright’s Custom Chrome Plating presents the Mark Keegan Classic Season Championship Night. The All Pro Aluminum Cylinder Heads/Kistler Racing Products 410 Attica Fremont Championship Series Presented by the Baumann Auto Group will be in competition battling for $4,000 to win. The Napa of Bryan 305 AFCS Presented by Jason Dietsch Trailer Sales competitors will battle for $1,000 to win and the Dirt Nerds Podcast/Propane.com UMP Late Models will also be in action.

The Angola, Indiana teen took the lead from hall-of-famer Tim Shaffer on lap 28 and drove to his second career FloRacing All Star Circuit of Champions presented by Mobil 1 feature win to open the annual Attica Ambush double-header weekend Friday on Stillwater Metals/Murphy Tractor Night. It was the second career win for Wise at “Ohio’s Finest Racing” speed plant, both coming this season for the 18-year-old driver. Friday’s victory was worth $5,000.

“To say we needed this after last week is an understatement. The last month and half, two months have been so rough. Some things that 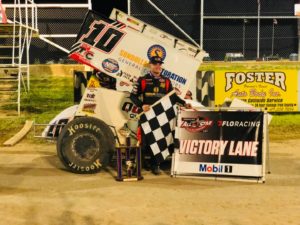 are in our control and a lot of things that are out of it. It’s just been such a trying year for me…I don’t think I’ve had as rough of a year as this one. To come out on top tonight after all the hard work from my dad, Wayne, Hoby…everyone on the team, it’s rewarding to be able to stand up here, especially at this place. I love Attica! I love all you fans…this place is electric and I love being here,” said Wise beside his Sun Dollar Restoration/Quick Pits Auto/Jason Dietsch Trailer Sales/Bill’s Towing and Repair backed #10.

Haudenschild who electrified the crowd all night came home in second.

“I felt good in the car and Ron Jacobs…he’s been with me the last five years and given me a good car and Bryan Grove has helped us a little bit this year. It feels good to get back into it. I’ve got Gravy and Zach Ames working on this and that’s what it takes,” said Haudenschild beside his Ron Jacobs Trucking/Canton Erectors backed #3.

Skylar Gee rounded out the podium.

“I thought we had something for Zeb and Jac. I got by Jac at one point and missed the bottom once and Haud’s up there doing what Haud does…it was a blast racing with him and Zeb and all these guys. It feels good to be back up front. Wished we had some traffic maybe we might have had something to say. I have to thank Mark and Julie and all of our sponsors for keeping us out here,” said Gee beside his Water Treatment by Design/Industrial Controls/Three B Services/Vector Industries backed #07.

Richmond, Indiana’s Steve Casebolt made his first appearance of the season at Attica pay off as the former Eldora Speedway Dream winner led all 25 laps of the Dirt Nerds’ Podcast/Propane.com UMP Late Model feature for his third career win at the track. The victory was worth $3,000. 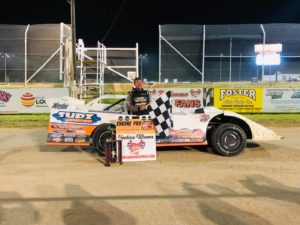 “I always love coming here. I’ve been coming here since I was like 16-17 years old, probably 25, 26, 27 years ago. I want to thank the Bores family for keeping it going strong. I want to thank my head crew guy…my only crew guy right now, Tate Swafford. He works tirelessly on this car and I really appreciate him. I don’t know how good we were tonight but we were good enough to stay out front,” said Casebolt beside his Sudz Equipment Rental/IGk Imaging.com/Rocket Chassis backed machine.

At the drop of the green for the 35 lap All Star feature outside front row starter Shaffer grabbed the lead over Justin Peck, Haudenschild, Wise, Tyler Courtney and Spencer Bayston. Courtney, the current series point leader, took third from Haudenschild on lap five and began to chase down Peck and Shaffer. Shaffer entered lapped traffic by lap 10 and Peck closed while Courtney, Haudenschild and Wise put on a terrific show in their battle for third.

Courtney brought out the first caution on lap 16 just as Peck was challenging Shaffer for the lead. Shaffer got a great restart and kept Peck at bay as Wise and Haudenschild battled for third. Courtney would bring out another caution on lap 18 with the running order Shaffer, Peck, Wise, Haudenschild, Gee.

Just as Wise began to challenge Peck for second, Byron Reed would take a tumble on lap 27; he would walk away unharmed. Second running Peck would go pitside with a cut tire, moving Wise into second. On the restart Wise immediately put pressure on Shaffer but a Cole Macedo flip on lap 27 – he was uninjured – brought the action to a halt.

With eight laps to go and a clear track it looked like Shaffer was headed to victory lane but some sort of mechanical issue hit the leader with six laps to go just as Wise passed for the lead. Wise held off Haudenschild on the restart and drove to the win with Gee, Bayston and Hunter Schuerenberg rounding out the top five.

While Casebolt led all 25 laps of the late model feature it wasn’t easy as cautions early on kept the field close including 16-year-old Colin Shipley who stayed within a couple of car lengths of the leader the entire way. Casebolt took the checkers ahead of Shipley, Devin Shiels who took over the track’s point lead, Mike Bores and last week’s winner Nathon Loney.

Because of the threat of weather times for Saturday’s Attica Ambush have been moved up. Gates will open at 2 p.m. with racing under way at 6 p.m. as the All Stars battle for $10,000 to win with the Fremont Fence 305 Sprints going for $1,000 to win.