ATTICA, Ohio – D.J. Foos capitalized on the opportunity when it presented itself Friday at Attica Raceway Park to score his second career 410 sprint win on Gordon Lumber/Edward Jones Mike Neill Financial Advisor Night. When race leader Buddy Kofoid tangled with a car he was trying to lap with nine circuits remaining, Foos used the ensuing restart to power around Trey Jacobs and drove to the win.

Australian transplant Stuart Williams – in his first night of racing for 2019 – led all 25 non-stop laps in the Fremont Fence 305 Sprints to score his first career Attica win worth $1,000.

Kent Brewer looked on his way to the win in the dirt truck feature but a trio of lapped trucks held him up in the last corner of the final lap and Wayne, Ohio’s John Brooks snuck by for his first career Attica victory.

Foos, a former Attica 305 sprint champion, driving the Burmeister Racing machine, knew his team was on the verge of getting a win. It was also a big night for Foos in his bid to win an Attica Raceway Park season title as it was double points on the line for mid-season championship and it was an All Pro Aluminum Cylinder Heads/Kistler Racing Products Attica Fremont Championship Series (AFCS) Presented by the Baumann Auto Group point night as well.

“To be honest I thought I was moving up through there pretty good. I couldn’t see really and then I saw the Kofoid kid…it’s a shame what 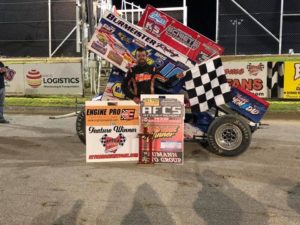 happened to him. Right now Buddy and the Linders…they are the car to beat. It’s a shame to see him taken out like that. I really thought if I got to him I had something for him. There at the end I could cruise in the middle, the bottom…where ever I needed to go. I was pretty good. I feel like we have had speed all year. We’ve just had bad starting spots. Tonight we started eighth. I fell back there pretty far at the beginning and I saw Cale (Conley) peak under me and I knew I had to get going. I can’t thank this Burmeister crew enough. These guys put everything they have into this deal. I texted Mikey, the crew chief today and said ‘dude we need to get a top three both nights this weekend so we can go into speedweek with some momentum.’ He said ‘why don’t you just win.’ I thought I was just being conservative but here we are…this is awesome. It feels so good to win at Attica. This is the toughest competition around,” said Foos beside his Jet Express/CR Juices/Crown Battery/Greer Automotive/Burmeister Trophy/KS Sales & Service/Kistler Engines/Kistler Racing Products/NAPA Auto Parts/Dave Story Equipment/Minor Customs backed machine. 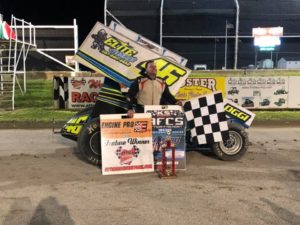 “This has been a long time coming. We moved from the other side of the world to make this happen. My dad, my wife, my kids…everybody has put so much effort into this. It’s amazing,” said Williams.

In the 15-lap dirt truck feature, Brooks grabbed the early lead but surrendered the point to Kent Brewer on lap seven. Brewer was heading to the checkers when three lapped trucks got side ways and he had to take evasive action and Brooks drove to the bottom of turn four and powered to the win.

“I hate that for Brewer…he was faster than me. I guess you just have to be there. I just figured I’d go where he didn’t go…it worked out. Old man Babcock does a real good job helping me with my driving and setting the truck up. I got Chris who has been with me since day

Craig Mintz and Stuart Brubaker brought the field to green for the 30-lap Callie’s Performance Products 410 sprint feature but Mintz suffered a mechanical issue and slid off the high side of turns one and two and was towed to the pits while Ricky Peterson spun as well. On the second attempt for a start, Brubaker grabbed the lead with pressure from Cap Henry and Trey Jacobs. Henry took the top spot on lap two with Jacobs, who borrowed an engine to compete, utilized the track’s bottom groove to grab the lead on lap three over Henry, Brubaker, Nate Dussel, Kofoid, Byron Reed and Foos just as the caution flew for another Peterson spin.

When the green flew Jacobs began to pull away from Henry while Brubaker, Dussel, Kofoid and Reed waged a tremendous battle. Kofoid, who came into the night leading the AFCS and Attica point standings, moved into fourth on lap nine and took third from Dussel two circuits later. As Jacobs continued to lead, Kofoid was on a mission having started 10th and grabbed the second spot on lap 14 just as the leaders had caught the back of the pack.. With 12 laps to go, Kofoid had chopped Jacobs’ lead to four car lengths with Henry, Foos, Dussel, Brubaker and Reed in pursuit. Kofoid used the cushion to power into the lead on lap 19 with Henry and Foos locked in a great battle for third. With nine laps to go Kofoid used a lapped car to drive around Jacobs into the lead but disaster struck two circuits later as Stambaugh spun right in front of the leader, collecting him and causing damage, ending his night.

That gave the lead back to Jacobs but it was short-lived as Foos used the restart to blast away at the cushion to grab the lead. Foos drove away for the win with Jacobs, Henry, Dussel and Reed rounding out the top five.

Williams and Peters brought the field to green for the 305 A-main with Williams gaining the slight advantage over Peters, Paul Weaver, Brandon Moore and a great battle for fourth involving Mike Keegan, Jason Keckler, Bobby Clark and Seth Schneider.Williams began to pull away wile Peters held off Moore with Weaver comfortably in fourth as the battle for fifth intensified between Keckler, Keegan, Tyler Street, Schneider and Clark. As laps quickly ticked off, Williams caught the back of the field on lap 11 and four laps later he had three lapped machines between himself and Moore as Peters was locked in an entertaining race for third with Weaver, Keckler and Street.

With five laps to go Williams held a commanding lead over Moore, Peters, Weaver, Keckler, Street, Keegan, Schneider, Clark and Kyle Capodice. But, with three laps to go Williams was mired in heavy lapped traffic and Moore cut into his lead. Williams was able to maneuver around the lapped cars and drove to the win in a feature event that took just over eight minutes to complete. Moore, Peters, Keckler and Street rounded out the top five.

Brooks grabbed the lead in the dirt truck feature at the drop of the green, holding off Dustin Keegan, Noah Wagner, Cory McCaughey and Kent Brewer. Brewer moved into third on lap three and took second a circuit later. Brooks and Brewer battled side by side for the lead for the next two laps before Brewer was able to wrestle the top spot away. Meanwhile a great race for third was underway involving Jimmy McGrath Jr., Keegan, McCaughey, Brad Keckler and Jeff Ward.

Brewer seemed to have the win in the bag until coming through turns three and four to the checkers. Three lapped trucks were dicing it out and Brewer had to take evasive action and Brooks drove to the bottom and to the checkers. Brewer, McGrath, McCaughey and Shawn Valenti rounded out the top five.

Attica Raceway Park will kick off the Ohio Sprint Speedway with the Ollie’s Bargain Outlet All Star Circuit of Champions on Friday, June 14. The Summit Racing Equipment UMP Late Models will also be in action battling for $2,000 to win and double points toward the Attica track championship.

About Edward Jones Investments-Mike Neill – www.edwardjones.com
As an Edward Jones financial advisor, Mike Neill believes it’s important to invest his time to understand what you’re working toward before you invest your money. It’s also important to understand the level of risk you’re comfortable accepting when investing so he can balance it with the steps necessary to reach your long-term goals.
Whether you’re planning for retirement, saving for college for children or grandchildren, or just trying to protect the financial future of the ones you care for the most, Edward Jones Investments and Mike Neill can work together to develop specific strategies to help you achieve your goals. Edward Jones can also monitor your progress to help make sure you stay on track or determine if any adjustments need to be made. In addition, Mike Neill welcomes the opportunity to work with your attorney, accountant and other trusted professionals to deliver a comprehensive strategy that leverages everyone’s expertise. Working together, Edward Jones can help you develop a complete, tailored strategy to help you achieve your financial goals.

About Gordon Lumber Company – www.gordonlumber.com
The year was 1868. The country was putting itself back together after the Civil War when a man named Washington Gordon came to the young village of Oak Harbor, Ohio to start a business. What began as a single saw mill on the banks of the Portage River has grown into a trusted home improvement resource throughout Northwest Ohio. You’ll find Gordon Lumber home improvement stores in Fremont, Port Clinton, Bowling Green, Genoa, and Huron. And our Component Plant is in Findlay. At each of these locations, we provide higher quality lumber and building materials, along with old-fashioned customer service you won’t always find with our competitors.