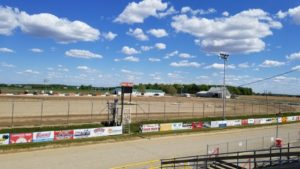 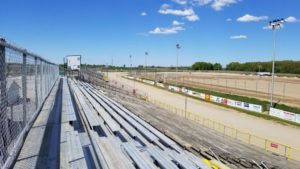 Great view of new seating! Will be open for general admission seating for World of Outlaws Kistler Engines Classic on Friday, May 21st

ATTICA, Ohio, – Stuart Brubaker admits he got a little complacent while leading the 410 feature at Attica Raceway Park Friday, May 14 for the Eric Phillips 33rd Anniversary Classic. That allowed Chris Andrews to close lap after lap. Late in the race when Andrews showed Brubaker his nose, the track’s 2018 champion got back up on the wheel and Brubaker drove to the victory on American Powersports/The Adkins Group/Smith Paving Night Presented by Integrity Auto and Truck Sales.

The win was Brubaker’s ninth career win in the Callie’s Performance Products 410 Sprints. It also boosts the Fremont, Ohio driver’s standing in the Kistler Racing Products/All Pro Aluminum Cylinder Heads Attica Fremont Championship 410 Series Presented by the Baumann Auto Group and was worth $4,000.

“I started backing my corners up a little bit…you know I’m getting a older and my shoulders get tired. He (Andrews) stuck his nose in there 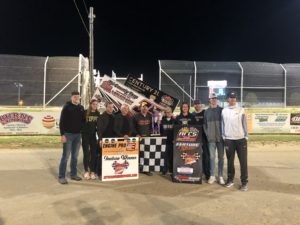 and I was like oh shit I have to pick it back up. I kept missing it down here off two and I’d hit that hole and run underneath it and I could only get about half or three quarter throttle down the back stretch. When we hit it right we can get wide open so I knew we were fine. This is so awesome. These guys have been working their tails off…thank you Donny, Zach, Benji, Tyler…he can’t be here tonight…my girlfriend isn’t here and my daughter…everybody has been busting their butts on this family owned team to get it to where we are at tonight,” said Brubaker beside his Edward Jones, Tri County Tarp, Dave Story Equipment, Kyle Daugherty Century 21, Bolte Real Estate, Randy Beeker Excavating, SRM Construction, KS Sales & Service, Speedways Bar & Grill, Handy Grafix, Gressman Powersports, Schaeffer’s Oil, Phillips Electric, Hoffbauer Disposal Services, Finish Line Race Fuels backed machine.

Mansfield, Ohio’s Matt Irey, Attica’s 2016 late model track champion, survived a tangle with a lapped car coming to the checkers to claim his second win of the season in the Propane.com/Dirt Nerd’s Podcast UMP Late Models. It was his 7th career win at Attica and moved him 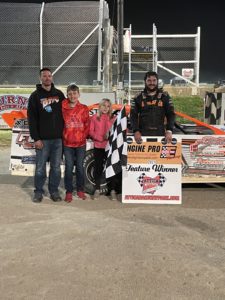 to within six markers of Ryan Markham for the lead in the track’s points.

“Nothing against the guys that are out there racing….just hold your line. That’s all we ask…the faster cars just want you to hold your line. Then it doesn’t nearly cost you a race like that. We had a really, really good race car. Started seventh and before I knew it I was up to second and I was like oh man we got something. I can’t thank everyone enough…Brent at Accu-Force, Robin, Rod Eddleblute’s Garage, my mom, my dad, my wife, Justin, Chris whose at home…he gets the tires ready for us…all my sponsors,” said Irey of his Dalton Garage Door, Nugen Led Lights, Artizian Concrete, RL Bond Septic, Specialty Tree Service, Kilgore & Harring CPA, Shagalees backed #36.

After opening the season with three straight wins in the Fremont Fence 305 Sprints, five time Attica division champion Paul Weaver went through some bad luck, including a blown engine a couple of weeks ago. The Fremont, Ohio driver took the lead new division track record holder Jamie Miller with just seven laps to go and went on to score his 60th career victory in the division. It was also a great points night in the NAPA of Bryan AFCS 305 Sprint Series Presented by Jason Dietsch Trailer Sales. 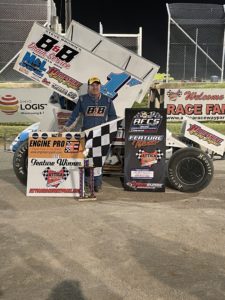 ….it was just maneuverable. This was the second race on this motor…it was Chase Dunham’s motor that Bob Hampshire…thank God he let me borrow it…he was keeping it for Creed (Kemenah, his grandson) for the end of this year possibly. It’s mine now. I have to thank Bob Hampshire, Daniel for being there, B&B Drain, Pam and Steve Brown, M&L Excavating and everyone that helps,” said Weaver.

At the drop of the green for the 30-lap Callie’s Performance Products 410 Sprint A-main, pole-sitter Brubaker jumped into the lead over Duane Zablocki, Brandon Spithaler, Cole Macedo, Chris Andrews, Nate Dussel and Caleb Griffith. Brubaker quickly pulled away to a nearly three second lead by lap six with Spithaler and Macedo moving into second and third respectively.

A caution on lap 11 wiped out Brubaker’s big lead and another a lap later kept the field close. Brubaker executed perfect restarts and drove away as Spithaler and Andrews battled for second with Andrews gaining the spot on lap 14. With six laps to go, Andrews began closing on Brubaker, chopping a tenth of a second off lap after lap.

With a hand full of laps remaining Andrews showed Brubaker his nose which prompted the leader to sit up and drive which he did to take the win over Andrews, Spithaler, DJ Foos and Macedo.

Jim Gingery and Markham brought the field to green for the 25 lap Propane.com/Dirt Nerds Podcast Late Model A-main with Markham gaining the advantage over Gingery, Casey Noonan, Tyler Thompson, Irey and Justin Chance. While Markham drove away, a tremendous battle ensued for second with Gingery, Noonan, Thompson and Irey with Noonan taking the spot on lap three while Irey moved into third.

Markham jumped the cushion in turn four on lap four and that allowed Irey to close. The duo battled side by side over the next three laps before Irey took the lead on lap seven and began to pull away as they raced into traffic. Thompson drove into second on lap 13 and was closing on Irey when the leader also bobbled on the cushion in turn four on lap 15 but was saved by a debris caution.

On the restart Irey pulled away again while Markham rallied to regain second. With four laps to go Markham had pulled right on Irey’s rear bumper. The battle was taking place as they raced through traffic. Coming to the checkers, Irey made heavy contact with a lapped car but made a great save to drive to the win over Markham, Thompson, Chance and Devin Shiels.

At the start of the 25 lap Fremont Fence 305 A-main, two time track champion and new track record holder Jamie Miller quickly established himself as the car to beat as he quickly pulled away from the field. A good fight for second between Kody Brewer, Seth Schneider and Weaver took place until a caution on lap seven.

When the green flew again so did Miller as Schneider and Weaver gave chase. Weaver took second on lap 12 and quickly cut into Miller’s lead. Weaver drove under Miller on lap 18 but Miller fought back. Weaver was able to move around in lapped traffic and drove away for the win over Miller, Steve Rando, Brewer and Schneider.

Attica Raceway Park will host the World of Outlaw NOS Energy Drink Sprint Car Series for a $10,000 to win affair on the Kistler Engines Classic Friday, May 21. The 305 sprints will also be in action. For reserve seats go to www.atticaracewaypark.com and click on the banner at the top of the home page.

“We had very saturated grounds from Thursday night’s rains and more rains and cold temperatures are called for today. We will try again next week,” said Rex LeJeune, Director of Operations at Attica Raceway Park.

Attica Raceway Park will host the Eric Phillips 33rdAnniversary Classic on American Powersports of Findlay and Sandusky Night, Friday, May 14. The All Pro Aluminum Cylinder Heads/Kistler Racing Products 410 Attica Fremont Championship Series Presented by the Baumann Auto Group will battle for $4,000 to win thanks to Spanky’s Pizza of Carey, with the NAPA Auto Parts of Bryan 305 AFCS Presented by Jason Dietsch Trailer Sales gunning for $1,000 to win thanks to Gressman Powersports. The Propane.com/Dirt Nerds UMP Late Models are also in action.

ATTICA, Ohio – When the World of Outlaws NOS Energy Drink Sprint Car Series invades a track that hosts weekly 410 racing like Attica Raceway Park, one of the most exciting things for the fans is cheering on their “regular” racers to beat “the Outlaw invaders.” When the World of Outlaws come to Attica Raceway Park on Friday, May 21 for the Kistler Engines Classic, the “regular” racers can make a lot of extra money!

Besides the $10,000-to-win feature, Attica Promoter John Bores will once again show his appreciation for the great racing the Callie’s Performance Products 410 Sprints have put on so far this season. Attica will cover the World of Outlaws membership fee for the top 15 in weekly points after the track’s May 14 event.

Bill Strong of Clyde, Ohio, a long time Attica fan, will give the fast qualifier from among the track’s top 15 in points a $100 bonus as well.

“It wasn’t that long ago that the top three feature finishers at Attica in a World of Outlaws event were not series regulars. Our local competition is among the toughest in the country and we know our teams will be ready when the World of Outlaws come to Attica. It will be an entertaining night for sure,” said Rex LeJeune, Director of Operations at Attica.

“John knows the work and costs the local teams have in preparing for these big events and wants to reward them for their dedication not only to the track but to 410 sprint racing,” added LeJeune.

Reserved seats for the Kistler Engines Classic are available at www.atticaracewaypark.com or www.woosprint.com.